Hello Sovryns, welcome to part 5 of “A Sovryn’s Journal”. The previous part can be found here:

A Sovryn’s Journal March 30, 2022 Hello dear Sovryn Community, welcome to part 4 of “A Sovryn’s Journal”. First of all, i’d like to tell you that this Blog can now be found on Substack via Make some noise and subscribe! Let’s go. $SOV had a selloff. My guess would be tokenomics as discussed in the previous part, delay in anticipated products and low dapp volume as the case for it. Some investors losing confidence. I took the opportunity to get my hands on some really cheap SOV. As always …

Sovryn, DeFi on Bitcoin. Click to read A Sovryn's Journal, by Sacro, a Substack publication. Launched 21 days ago.

There was a lot of drama in april. Heated atmosphere and a lot of noise from people who I have hardly seen before or not at all in the forum.

But even well-known Sovryn’s have expressed criticism or participated in the discussions with much enthusiasm. After the price crash it should be clear what it was about: stabilize token price, artificial measures to satisfy nervous investors. Many proposals that are not feasible. But valuable suggestions and proposals also came out of it. Also smart solutions that can actually be implemented via SIP, such as from @TheGimp.

I personally believe that there is indeed a need for work on tokenomics. Definitely on the tokenomics information, which is difficult to grasp. The tokenomics appear opaque, although it might not be that complicated. I will try to bring some clarity to this in this journal.

At least the SOV price could recover somewhat. After the hard crash to 5700 sats, there was a small but fine rally to 9000 sats. A nice relief for liquidity providers with painful impermanent loss and for all SOV holders. Let’s discuss the following points in this issue:

Please note that I am not part of the Sovryn team, just a regular Sovryn citizen. Nothing written down here is investment advice and these are not official numbers for Sovryn. Read this with healthy suspicion, I may be wrong. 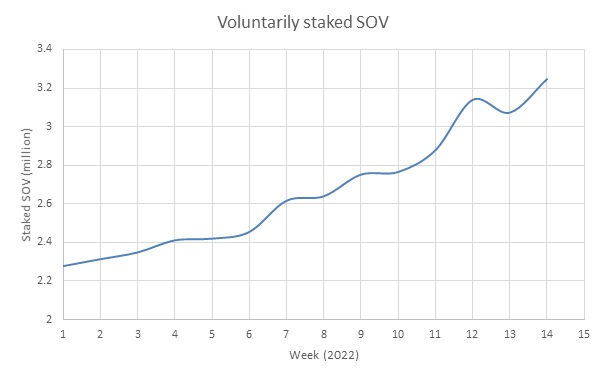 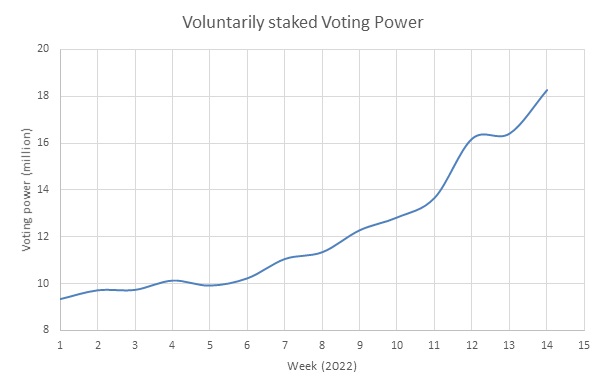 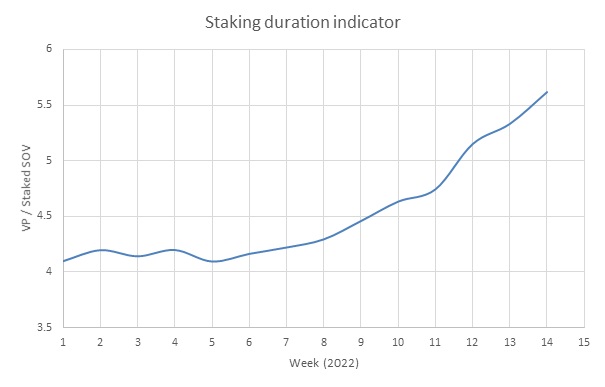 There is indeed demand for Voluntary Voting Power. Although stakers can enjoy their shares on slashing fees and there are some aborted staking positions, more and more SOV is being locked up for an increasingly long period of time. The Degen in me hopes that the first two charts mimic the start of an S-curve.

We have passed the 3 million staked SOV mark and if the trend continues, the 4 million mark is only a few weeks away. The voluntary voting power may even break the sound barrier of 20 million voting power in April.

The staking duration indicator (voluntary voting power / voluntary staked SOV) also reached new heights with a score of 5.6. Using the quadratic VP formula, this suggests an average staking duration of 766 days or 110 weeks . By the way, this suggests that SIP-24 liquid SOV for stakers right now has an average APY of 17.6% and with 3.250.000 staked SOV this means a payout of 572.000 SIP-24 SOV per year or 11.000 SOV per week on average .

If we consider the fact that right now, more than 70.000 SOV gets staked on average per week in 2022 , SIP-24 seems to have a very nice effect as more SOV gets locked than paid out with regard to stakers. If you compare that to the monthly liquidity mining rewards of 450.000 SOV, it should be clear that the staking rewards are not the main driver for the selling pressure. 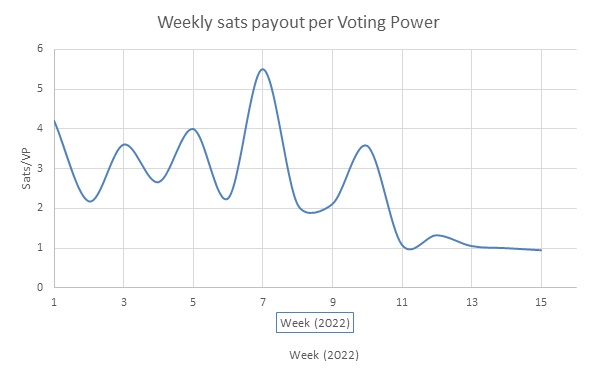 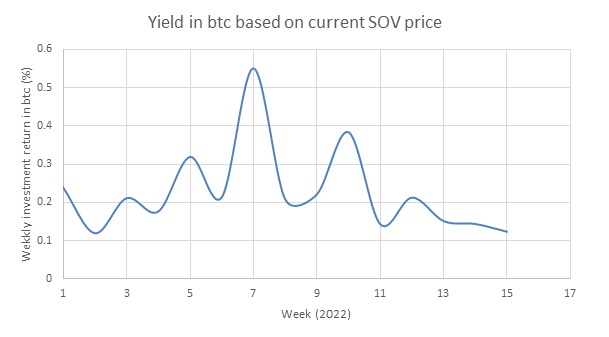 With all the staking going on, the share of each staked SOV gets lower. 1 Voting power gives less sats than before. Right now it’s starting to fall below 1 sat/VP in weekly payouts. The Dapp volume is not very strong right now and Voting power goes parabolic.

I think this trend will continue for some weeks. Let’s see what happens when Zero launches! With the relatively low SOV price, the APY% in btc is not too bad in my opinion. Current SOV price promises 0.1% weekly rbtc yield on an investment in SOV and staking it for max duration which is still decent.

In previous posts I have already discussed tokenomics and the current high inflation rate of SOV. This was mainly with reference to the official tokenomics chart. After the heated discussions of the last weeks, a small group of Sovryns (@dseroy, @bananas_in_the_sky and me) felt motivated to do some more research. Here’s a breakdown of which funds are still emmiting SOV:

There are significant differences to be noted here: The tokens in the Founders Fund and Early Funders belong to individuals, namely the founders and early investors. These SOV belong to them and there is no way for Bitocracy to change that. Only these individuals themselves have control over their assets, they are Sovryn.

However, the funds in the Ecosystem Fund, Adoption Fund and Development Fund still belong to Bitocracy or the Exchequer Committee. These funds can be governed by SIP’s, as happened in October with this SIP:

SIP-00XX: Completion of SIP-0015 and Additional Release of SOV

DRAFT SIP-00XX: Completion of SIP-0015 and Additional Release of SOV This SIP proposes the transfer of SOV from the Adoption Fund, Development Fund and GoverorVaultOwner to the Exchequer multisig. History of SOV transfers: SIP-0015: Sovryn...

I believe that from these funds the Exchequer Committee pays the developers and the liquidity mining rewards as well as other costs. In this thread Sovryn Tokenomics - Taskforce - #12 by bananas_in_the_sky

we could find clues for the Adoption fund which shows the following:

Of this, based on the above SIP, 9,925,931 SOV have been transferred from Bitocracy to the Exchequer Committee. The remainder (7,568,522 SOV) is still owned by bitcocracy and does not belong to any individual. Although the tokens are available, they are not yet on the market. They could of course be used for a funding round or to sustain LM rewards. But this has to be decided by SIP. To a certain extent, this also applies to the Development Fund and Ecosystem Fund as well. Of course, running costs have to be covered with these tokens. Right now, the SOV from the October SIP seem to be used for that. Unfortunately, I do not know how long they will last.

Anyway, it can be assumed that between the theoretical tokenomics spreadsheet and the current distribution of SOV on the market is a miles difference. There is also room to hold back a larger portion of the funds under discussion for a longer period of time and to adapt tokenomics to Sovryn’s long-term vision as proposed by @TheGimp.

That’s it from me, see you next time! Thanks for reading and stay Sovryn!

Part 6 is here! Check out

Sovryn, DeFi on Bitcoin. Click to read A Sovryn's Journal, by Sacro, a Substack publication. Launched 2 months ago.

Thank you Sacro, excellent, as always!

keep up the god work! 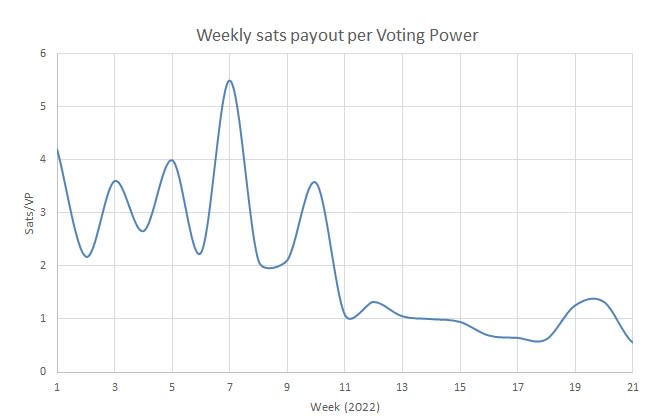 Part 9: Also includes some relevant data with regards to SIP-51